Way back in 1998, the Ministry of Defence decided it needed new aircraft carriers and announced a competition amongst defence contractors. In 2003, they announced a winner, and in 2007 they signed a contract worth £3.9 billion for two vessels. As of mid-2011 they are expected to cost £5 billion (widely regarded as a gross underestimate) and the first carrier will not enter service until 2020. It will not have any aircraft. When the second carrier is ready for service, the first will be sold or moth-balled. The carriers will be 932 feet long, and will displace 65,600 metric tons.

Five days ago, the US Navy announced the name of a new aircraft carrier it was building, the USS John F Kennedy. Construction had already begun in early 2011 and it is to enter service in 2018. It will be longer (1092 feet) and heavier (101,600 tons displacement) than the Royal Navy carriers, will carry 75 aircraft, and cost an estimated $10.2 billion. The US Navy currently has eleven carriers.

Today, P&O Cruises announced they are to build a new luxury cruise liner. It too will be longer (1082 feet) and substantially heavier (154,407 tons gross) than the Royal Navy carriers, will carry the same number of aircraft as HMS Queen Elizabeth (ie none), will be in service in 2015, and will cost £500 million.

So private enterprise can build a bigger, better ship at a fraction of the price and have it at sea sooner. If we had given P&O the job at the outset we’d have two carriers off Libya right now making a useful contribution to our campaign, and have a lot more money in the coffers. 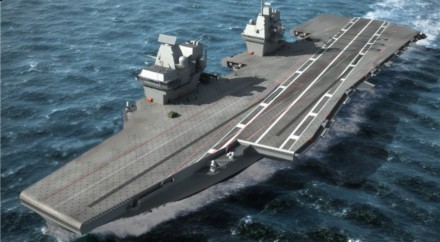