War is an ugly, horrible business as anyone who has been involved will tell you, whether combatant or civilian. And while time heals all but the deepest wounds and former adversaries can meet again in peace, that’s not to say we should forget those wounds because I can’t think of a single war fought between two sides who were both the “good guys”. Inevitably, wars are between good and evil and in the interests of celebrating the triumph of good over evil, the good guys should be remembered and they deserve to have their sacrifices honoured.

That doesn’t always happen, and it hasn’t happened yet in the case of 55,000 courageous young men who made the ultimate sacrifice and gave their lives for our freedom. They served in the RAF’s Bomber Command and had a worse chance of survival than a world war one infantry officer. 55,000 killed out of 125,000 aircrew is a devastating loss ratio, yet those who survived one raid went back out on the next one. They received no Campaign Medal for their extraordinary bravery, and they still do not have an official memorial. Dresden is often cited as the reason.

This weekend marks the 65th anniversary of the bombing of Dresden. Over the course of two nights, 1300 heavy bombers dropped 3900 tons of bombs resulting in a firestorm that claimed up to 25,000 mostly civilian lives, and it remains one of the most controversial acts of world war two. I lament any death, but what is special about Dresden? Other cities had a worse pounding, don’t their dead count for anything? Or is it okay if civilians are only killed in ones and twos? Is it because they died in a firestorm and some other method of killing them would have been okay?

We should remember the loss of all civilians killed in the war, and not single out the unfortunate residents of Dresden and forget the rest. So why do we do that? Quite simply, Dresden remains controversial because of the enduring effect of Nazi propaganda during the war, and Soviet propaganda after it. The Nazis and the Soviets both wanted to demonise us. Würzburg was bombed a month later and suffered more devastation, even though far fewer bombers were involved in one brief air raid. Why do we not remember those poor victims the same way? Is it because “only” 5,000 residents were killed? No, it’s not about the people, Dresden is a touchstone for pacifists while Würzburg didn’t have the benefit of Soviet propaganda.

The propaganda machine continues to crank away, only with different hands working the handle. War is an ugly, horrible business; there is no “nice” way to kill people. But sometimes it is necessary and all that had to happen to prevent Dresden was that Germany had to stop fighting. Yet even children were put into uniform and armed and sent to fight the advancing allies. Is there a practical pacifist response to a ruthless and desperate totalitarian system? The war against the Nazis was necessary, and pacifism was tried first, sincerely and earnestly.

We didn’t choose to go to war lightly and frivolously. We were still weary after the first world war, “the war to end all wars.” But we were confronted with a ruthless, aggressive Germany the Nazis had motivated ready to fight a total war. That included purging Germany of all Jews, Gypsies and the mentally and physically disabled. The good burghers of Dresden were as thorough as any other town or city in sending all their Jews and others to the concentration camps.

Here is the eyewitness account of a Jewish slave worker:

Roman Halter, now 82, was working as munitions worker in Dresden at the time of the attack. A Polish Jew, he had survived the Lodz Ghetto and selections at the death camp of Auschwitz-Birkenau.

He says, “There were cartwheels of fire chasing oxygen and we had to throw ourselves down on the tarmac. The tarmac was already hot. And as we went through people were jumping from buildings.

“People were jumping around with flame. It was horrendous this vision. We had more sympathy for these people than the SS who only cared about guarding us.

“But we felt really that they started the war. We knew that England was bombed, that Coventry was bombed and they deserved whatever they’re getting.”

After the war, Mr Halter came to London and received schooling from former Bomber Command pilots. Inspired by the beauty of Dresden, he became an architect. He says, “Fifty five thousand of them were killed. Everyone of them should have been honoured because they did their duty.

“They didn’t protest; they felt that if Hitler wins, Europe and the world will be thrown into a darkness for a thousand years. And if it had not been for Churchill and the RAF boys we would not have won.”

The contribution of Bomber Command to the war effort was fully understood by the Nazis too. Albert Speer, minister of armaments wrote this after the war:

“The real importance of the air war consisted in the fact that it opened a second front long before the invasion in Europe … Defence against air attacks required the production of thousands of anti-aircraft guns, the stockpiling of tremendous quantities of ammunition all over the country, and holding in readiness hundreds of thousands of soldiers, who in addition had to stay in position by their guns, often totally inactive, for months at a time … No one has yet seen that this was the greatest lost battle on the German side.”

Roman Halter and Albert Speer are both right. And Bomber Command should have its memorial, for without their sacrifice the Nazis would have given us a thousand more Dresdens. 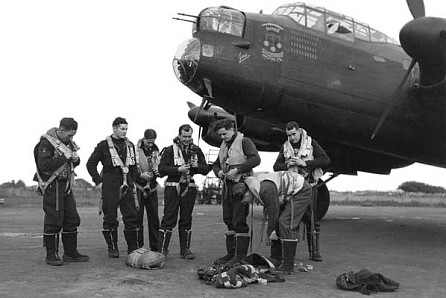