The Sun says it published the photos of a naked Prince Harry because it was in the public interest.

“How do you know it’s in the public interest?” you ask them.

“Cos sales went up, dinnit”

That’s a convincing argument to the Sun. It’s the same one used by the News of the World to justify hacking peoples’ phones. It’s obviously something in the Murdoch corporate culture that they can do whatever they like if it results in extra sales. It’s a completely twisted argument because ‘what the public is interested in’ isn’t the same as ‘what is in the public interest’. For example hacking Milly Dowler’s phone (the teenage girl who was abducted and murdered) amongst the thousands who had their phones hacked in the search for salacious stories was not in the public interest, but finding out who authorised the hacking and how it came to happen most certainly is.

Sensationalism and scandal sells newspapers. We know that. The fact is, there are many genuinely sensational stories out there and many great scandals that should be reported, enough of them in fact to fill a newspaper every day without the need to ‘sex them up’. One such story might indeed be that the third-in-line to the throne had a naked romp in a hotel room in Las Vegas. Okay, let’s talk about that and let’s talk about how his security detail handled the situation, but do we need to see the photos?

“Yeah, we got to see the photos cos it shows the sort of thing sleazy newspapers will print if they get the chance, and therefore that’s why he shudna done it.”

The day before the Sun decided to go ahead and publish the real photos it mocked-up the pose of Prince Harry and a naked woman by getting a journalist to stand in as a royal body double and having a naked woman posing behind. The only problem is the naked woman they used was a 21 year-old fashion intern there for work experience. Some experience; “highly unethical” is one quote, and I think “used” is the right term to use here. “Sordid” is another one. Mind you, Sun management issued a statement saying the pair were perfectly happy to strip off, so that’s all right then.

Reports from the Guardian:

It gets more interesting. After the storm of criticism of the Sun for getting an intern to strip naked, it looks to me like she was not naked after all. The photo below is a crop of the Sun’s front page where the picture appeared. You can just make out that she was wearing knickers which have been pixelated-out using Photoshop. You can tell this by the different size of the coloured spots where the knickers are compared with other parts of the body. 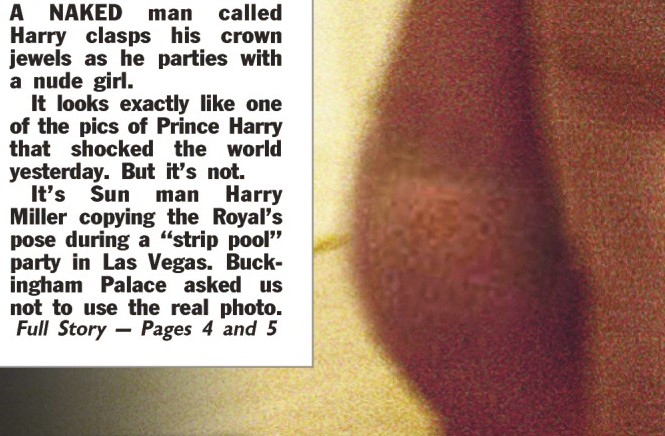