We’ve been here before. We’ve had Stalin on one side and Hitler on the other. Which one do we side with? In the event we went with Stalin but that didn’t work out as well as we’d hoped, we’d chosen one butcher over another.

We have the same dilemma again. We have Assad on one side and al Qaeda on the other. Which one do we side with?

True, it’s not just al Qaeda, there are other rebel forces too, some backed by the Saudis and some backed by the Iranians. But we must understand that if Assad loses, al Qaeda will ultimately win. They will simply crush any other rebel organisations as they are doing right now in Libya for example. It’s what they’re good at. They will participate in the civil war and then turn their weapons on the other rebels and hijack the resulting victory.

In the meantime a cultured and civilised people of innocent men women and children, are being mercilessly slaughtered.

Along with the inevitability of al Qaeda coming out on top, we need to accept that if we put one foot into this quagmire we will be there for a generation to come. Thousands of our men and women will lose their lives in military operations, and billions of pounds will be expended. Blood and Treasure the Americans call it. Are we willing to pay that price? Are we even able to afford it? We have made and we continue to make deep cuts in our armed forces. If we depose Assad we will need to stay there to enforce the peace. We had to do that in Iraq and in Afghanistan, and pretty soon we’ll have to decide whether to let Libya go or step in, and whether to support the Egyptian military or let Egypt go.

It won’t work to arm the rebels. It’s what we did in Afghanistan and it’s what got al Qaeda started.

There is another problem for us. Having expended all that blood and treasure in Iraq and Afghanistan, and then shamelessly abandoned the returning soldiers, including the wounded, we have all but destroyed the fighting spirit of our armed forces. We are going to find it very difficult to recruit again enough young men and women of the calibre we need and send them into combat. They won’t be that stupid. They won’t be that well equipped, either. As operations over Libya showed us, we seriously lack ability to project our forces and indispensable aircraft carriers have been dispensed with in the interests of sort-term expediency. No lessons have been learned and moronic command-level decisions have been made that cannot quickly be undone.

So we stand impotently at the sidelines watching the slaughter.

The solution may be to support intervention from moderate Arab states. We can supply equipment and technical support where needed, that would be useful. But the problem is that most of the moderate Arab states are pariahs with the left-leaning intelligentsia. We would be giving them legitimacy and obligating ourselves to them for saving us from having to intervene ourselves. Bang goes any hope of democratic reforms, they can suppress any dissent in their own countries and we won’t dare to complain.

My solution would be nevertheless to support Arab intervention. Wholeheartedly. No half measures. We should show leadership in this crisis and put together a coalition of mostly Arab troops. As we did to liberate Kuwait but with very few front-line troops of our own on this occasion. It should be a mostly Arab force. We and the Americans can provide a unified command structure, perhaps with a Saudi general in overall command. We can provide technical and communication facilities and offer Cyprus as a base. The Americans can additionally provide carrier-borne air cover.

And then we must learn the lessons of our own mistakes. We must start to rebuild our armed forces on a basis of trust. Those who enlist will be given the support they deserve, especially if they are wounded. They must never again be allowed to sleep on the streets or to be denied disability allowances by a rigid and unsympathetic system. They must be given the weapons they need, the vehicles, the helicopters and the ships.

Because the day will come, sooner than we think, when the violence will spill over into our own lands and we will have nobody to call on.

We’ve read over the last few years some pretty alarming reports in the press about the state of operations in Afghanistan, now we can read an authoritative report from Parliament which has had access to all the relevant papers and interviewed people involved at the highest level. It is a horrifying report.

“It is unacceptable that UK Forces were deployed in Helmand for three years from 2006 without the necessary personnel, equipment or intelligence to succeed in their mission, says the Defence Committee in its report on Operations in Afghanistan.”

“The Committee is disturbed by the fact that in 2006 the Secretary of State was being told that commanders on the ground were content with the support they were being given in Helmand when clearly they were not.”

Summary of the report

Index to the full report

Here are some further points about what the report says, distilled from an article in the Telegraph:

The full article in the Telegraph

My own view is that none of this comes as a surprise. We read all about this as it was happening, but it still comes as a shock to see our worst suspicions confirmed and to see how little the reality on the ground affected those at the Ministry of Defence whose incompetence created the shambles in the first place, and whose only response seems to have been to tell lies and cover it all up. As the Telegraph observes, the report names no names, but the four four-star officers named above presided over a monumental military cock-up that has cost 370 lives and counting, and more than 2000 wounded.

I lived in Aden as a child in the 1960s. I have very fond memories of the place and a clear understanding of how and why we, the Brits, came to be there, and how and why we left. History is full of little ironies, and Aden highlights several. 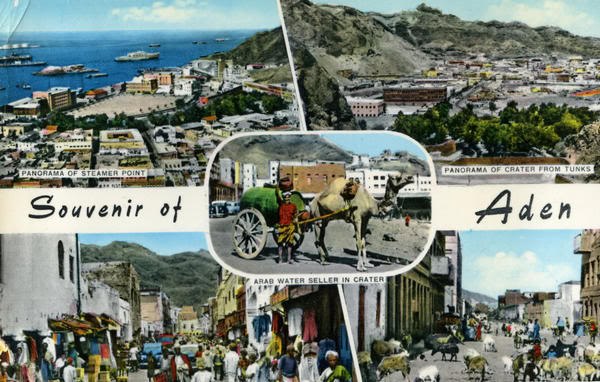 The first irony is why we were in Aden in the first place. One of the main reasons we went there over 170 years ago, was to combat piracy from Somalia and from along the southern tip of Arabia. It was seriously disrupting global shipping trade passing up the east coast of Africa and across to India. As most of that trade was ours, it was our job to deal with it. We dealt with it by established a naval base at Aden from which to patrol the Gulf of Aden and suppress piracy from Somalia, and by afterwards signing peace treaties with the various sheiks and sultans along the coast. They agreed not to allow piracy from their territories, and we agreed not to invade them. They became known collectively as the Trucial States. It’s a sign of the times that it now falls to the American and Chinese navies, amongst many others, to deal with modern-day Somali piracy.

The second irony is that having once kicked us out, Yemen has applied to join the Commonwealth. Aden in particular wants to break away from Yemen, which it became part of after independence, and has a specific goal of joining the Commonwealth. Yemen as a whole has already applied for membership so it’s not a contentious issue there. Similarly, Somaliland, a British Protectorate until 1960, wants to break away from Somalia, which it became part of after independence, and it too wants to join the Commonwealth. As much as I am a fan of the Commonwealth, I don’t see it as a “magic bullet” solution for failing states. Being a member of the Commonwealth hasn’t ensured that Pakistan, for example, has been able to deal with its own troubles in the North West Provinces. If anything, it has been a conduit that has eased the spread of al Qaeda to the UK, a route they have already started using from Yemen.

Third, the reason Yemenis wanted us out was to assert Arab nationalism, encouraged by Gamal Abdel Nasser who was in turn supported by the Soviet Union with money, weapons and ideology. Neither of them are around any more, but there is a more virulent and dangerous threat now in the form of al Qaeda, who have established a large base of operations in Yemen and thrust Aden back into the news headlines. Bin Laden has a more radical and dangerous agenda than Nasser ever had and, since the Cold War has ended and we have dropped our guard, he doesn’t need the resources of a superpower to back him up. Our own resources, such as the Internet and ease of travel, serve him well enough.

Fourth, the circumstances of our withdrawal from Aden have been, and may be, repeated in Iraq and Afghanistan. We were fighting a rear-guard action against two rival factions vying with each other for domination after we were gone – they had to be seen to be kicking us out. As well as fighting amongst themselves, they continued attacks on British troops even after we had begun to pull out. Bringing the warring Sunni and Shiite factions together has been the biggest challenge for the post-Saddam regime in Iraq. Afghanistan may be a different story unless the warlords can combine to challenge the Taliban.

Fifth, we had the support of Adenis loyal to the local sultans and they suffered vicious retribution afterwards. That pattern may well be repeated in Afghanistan, making anyone – police, army, civilian workers – associated with Hamid Karzai or the UN or Nato likely targets for the Taliban. In Aden, they remained loyal to their sultans and on our side until the end, will that be the case in Afghanistan?

Sixth, while we allowed the sultans to run their own areas outside the port of Aden itself, they were corrupt, autocratic and incompetent. It was as much to get rid of them that the insurgents, as they would now be called, were fighting. That is certainly true in Afghanistan today.

Seventh, the other reason we were in Aden was to establish it as coaling station to service the Royal Navy and our vast merchant fleet. In the post World War Two trade boom, Aden became the second busiest shipping port in the world and in 1958 only New York had more ships per day. But coincident with us pulling out Nasser closed the Suez Canal in 1967 following the Six Day war with Israel, and at a stroke wiped out Aden’s economy. It remained closed until 1975 and pushed South Yemen, as it had become, even further into the hands of the extremists. Afghan villagers have one cash crop – opium. We can’t just wipe that out, we need to ensure they have a viable alternative economy or the effect will be the same, to force them to support their own extremists, the Taliban.

We should try to learn from our experiences, positive and negative, in Aden (1960s), Iraq (1920/30s) and Afghanistan (1840s, 1870s, and again in 1919), as well as in other parts of the world where we have had to deal with insurgencies. Malaya (The Emergency), Kenya (the Mau Mau), and Palestine (Irgun, the Stern Gang) are just three more recent examples of many. We’ve got it right in some places, and dreadfully wrong in others.

History repeats itself because the people and the issues are always the same.