It’s been a bumpy ride for London 2012. The joy of being chosen as host city for the Summer Olympics was utterly erased by al-Qaeda carrying out the London bombings the next day, killing 52 innocent people in a series of suicide bombings on the London transport network. It’s incredible to think that was six years ago. I think it has had a lasting effect on anything to do with the Olympics with little of the original joy remaining. Now it seems, it is a grim exercise in preparing for the games, calmly and efficiently. Which has been done, I have to say. I’m highly impressed with the state of readiness of the stadia and the infrastructure with a year still to go. A far cry from the shambles that marked the Commonwealth Games preparations in Delhi last year.

But everywhere is that ghastly logo. A genital wart, ugly and disfiguring. Then there was the arrival of China’s Olympic torch from Beijing, escorted by a gang of heavy-handed minders causing pandemonium on the streets of London. And more recently, we have the ticketing fiasco. Possibly a million people turned away empty-handed, including the mayor of London and several gold medal winning Olympians. And not just turned away, but kept in the dark. Even the lucky ones who have been allocated tickets have no idea what tickets they have been sold.

And today the design of the Olympic torch that will be carried around Britain and Ireland has been revealed. I think it is stunning, I love it. Finally someone is displaying the creative flair that this country has such a rich heritage in. A pity it has that awful logo on it, but it doesn’t detract one jot from the beauty of the torch, that’s a measure of how perfect it is. 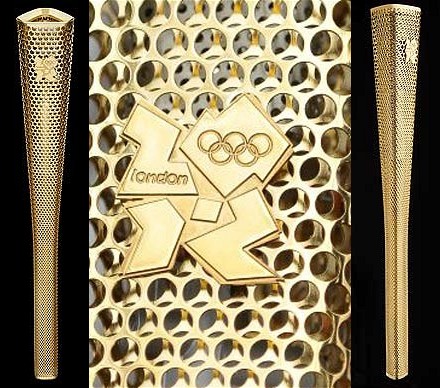 A close-up of the torch in the centre, with full length pictures at left and right