America has presented hard evidence that the upper echelons of Pakistan’s military is leaking top secret intelligence to al-Qaeda.

It has been an almost open secret for years that Pakistan’s intelligence agency, ISI, and the military have been infiltrated despite strenuous denials from Pakistan. The evidence, carried in person by CIA boss Leon Panetta to Pakistan for a show-down meeting this weekend is damning. The CIA passed surveillance images showing the location of two terrorist bomb making factories to their opposite numbers in Pakistan. The Americans continued to monitor the factories and observed them being evacuated shortly before they were raided by the Pakistani army. Telegraph article: Pakistan accused of tipping off al Qaeda. 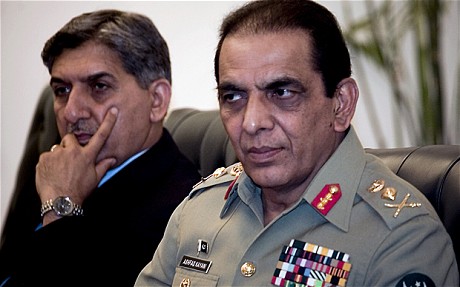 Less than two weeks ago, a Pakistani journalist was tortured and murdered for writing about an al-Qaeda link with Pakistan’s navy. Telegraph article: Journalist murdered. One particular story he wrote about is the alleged involvement of Pakistan’s intelligence agency in the Mumbai massacre. According to his information, the original idea had been put to the ISI by Ilyas Kashmiri, a senior commander in al-Qaeda as a way of provoking war with India, but ISI eventually shelved it. The plan was then taken over by Haroon Ashik, a former commander of Lashkar e Taiba, who spiced it up and put it into operation, murdering 166 people in a three day killing spree. It’s not so much a case of the ISI being innocent of involvement in the actual atrocity, if that’s the case, but that they are part of the terrorist network passing the plan amongst themselves. Telegraph article: Mumbai attack.

Do we know whose side Pakistan’s military is on?

We are still seeing the fall-out of trust between America and Pakistan now that we know bin Laden was living under Pakistan’s nose close to their top military academy in Abbottabad. Pakistan has nuclear weapons under the control of the military who are refusing American requests for access. Are we safe? Does ISI cooperation with al Qaeda and Lashkar e Taiba extend to nuclear weapons?

A really good article in today’s New York Times gives us the answer:  Pakistan’s military are against us.

“Gen. Ashfaq Parvez Kayani, who has led the army since 2007, faces such intense discontent over what is seen as his cozy relationship with the United States that a colonels’ coup, while unlikely, was not out of the question.”

“…demanding that General Kayani get much tougher with the Americans, even edging toward a break.”

“His goal was to rally support among his rank-and-file troops, who are almost uniformly anti-American.”

“That Bin Laden was living comfortably in Pakistan for years has evinced little outrage here among a population that has consistently told pollsters it is more sympathetic to Al Qaeda than to the United States.”

“…they were gradually “strangling the alliance” by making things difficult for the Americans in Pakistan.”

Seems pretty clear. Now, what about those nuclear weapons?